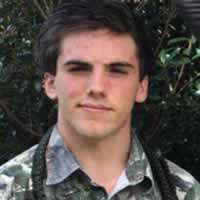 Submitted by:Mary O’Donnell
Born: 1997
Died: 2017
My Tribute: Sean’s sweet smile and sparkle in his eyes drew people to him. Sean was kind, funny, and a beautiful soul. He was an avid hunter who donated many deer to NC Hunters for the Hungry and mentored other young hunters. He was recognized with the NC Wildlife Governor’s Youth Conservationist of the Year award in September 2017. Sean was a wonderful older brother and son. He died on June 4, 2017 after his friends bet him to drink an entire bottle of vodka mixed with pills. He had a seizure and ended up drowning. His friends left him scared they would get in trouble. We are trying to spread awareness of the Good Samaritan Law in North Carolina and improve it to prevent more tragedies. Sean should be here today. We miss him terribly.