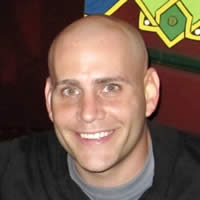 Submitted by: Laura Metro
Born: 1978
Died: 2013
My Tribute: John Winters Crystal, son of mother Diana Winters and dad Steven A. Gutten-berg, and brother of sister Kim Winters Crystal, born February 6, 1978, died July 24, 2013. He suffered cardiac arrest on July 21, 2013, and never regained consciousness. John was a graduate of Whitman High School in Bethesda, MD and the Gunnery School in Washington, CT. He attended Babson and Occidental Colleges and the Arizona State University. John was greatly admired by his many friends, family members and coworkers and could always be counted on to help in any way he could. He had a wonderful quality of being able to make all who encountered him feel at ease. He will be remembered for his intelligence, beautiful eyes (he was voted ” best eyes” by his high school class of 1996), infectious smile, athletic ability, sense of humor, culinary prowess, his generosity and sweetness. John was an organ donor and those who received his lungs, kidneys, liver and pancreas will live as a testament to his life.